Does Port Huron have one of the most economically vital downtowns? - P.J. Wallbank Springs, Inc. 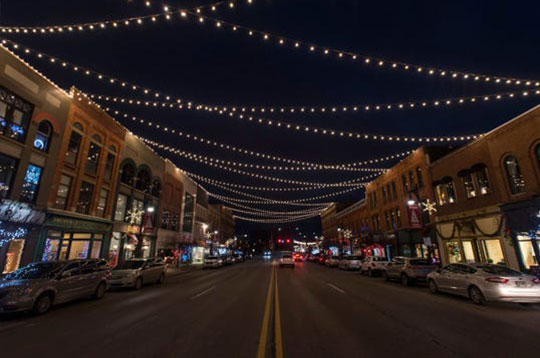 Kate Voss said the difference between downtown Port Huron seven years ago when she first opened her cafe versus now is "huge."

“Every storefront is filled," said the owner of Kate's Downtown. "I absolutely can feel the difference and the resurgence and I think it’s just going to keep getting better."

She said people have been choosing to shop in these downtown places and are investing their money there, which is nice to see for those who have risked opening a business in downtown.

In an emerging data-set attempting to gauge the economic vitality of small Midwestern downtowns, Port Huron lands in the top 10.

But what local city and business leaders see as another sign of a renaissance in the city’s Central Business District is also still a work in progress.

“It just so happens that Port Huron is on that list,” said Bill Ryan, a community business development specialist with the University of Wisconsin-Extension Center for Community and Economic Development. “So, our next step is to call the city planners and ask if that data is correct.”

The University of Wisconsin is spearheading the research project designed to measure the presence of businesses per capita in a half-mile radius around downtowns in 260 communities with populations of 25,000 to 35,000.

The data, also working with Ball State University, identifies Port Huron’s business-per-resident ratio of 0.0151 at number seven behind cities in Illinois, Iowa, Ohio and Minnesota, as well as Jackson, Michigan, at number six.

Port Huron City Manager James Freed said they learned about the study Thursday and, although researchers were still getting information, officials looked forward to being part of that interview process.

It isn’t just about the data, but also, he said, “Why are these cities doing so well?”

“We see and feel things getting better. But now, the analytics are measurable that it’s getting better,” Freed said. “It is something unusual. Our rate of growth, our expansion is outpacing other communities. Whether that was being per capita number one for inbound college graduates while not having a four-year university in the county, things like that. If it was a one-off study, but study after study from universities and groups outside our county with no affiliation with us, identifying and validating what’s going on.”

Voss said when she first opened she would put her sign out and there wouldn't be a car or person in sight. It was a bit "desolate."

Demiree Potter, owner of Ruboo Boutique, thought it was nice Port Huron was getting some recognition for its downtown.

“I think that Port Huron is coming back and I think we deserve to be number seven if not coming back as one of the top contenders,” she said. “Because, what, within the last six months we’ve had like 20 businesses open.”

There's been Patrick & James Menswear, District 43, BellaBolla and more and there's been a huge difference in traffic.

This time of the year is usually busier for businesses because Christmas is coming, but now even the slow season isn't slow anymore.

Potter said this will make even more people want to own a businesses in downtown as opposed to when she opened her boutique there a couple years ago.

“Now people are going to be like you want to be in downtown Port Huron because it’s where everyone is going to be,” she said.

Ryan said they believed the density ratio of businesses per resident — in Port Huron, the number of businesses in that radius was cited at 442 — was a “common basis to compare communities.”

“What kind of businesses are in these towns today?” he said. Now, he said they were attempting to “normalize the comparison” and ensure they had the true number of businesses with plans to engage more with communities next week.

It didn’t necessarily measure the quality or growth of the businesses factored, Ryan said, adding, “You could’ve lost business over the last 10 years and still make that list.”

Still, Freed said the city relies on outside data to verify its progress, and downtown was an important place to start.

“One you have investment, you have job growth, you have number of businesses calling Port Huron …” he said. “There is metrics that way. The reason (to) focus on downtown is that’s a good barometer for the rest of the community. You can’t have a doughnut without a doughnut hole, and we’re filling the doughnut hole with jobs and opportunity, and that gives people a reason to move back and live here.”