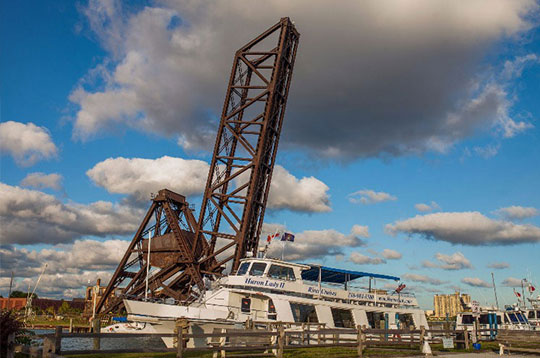 When Mallory Michaluk left Port Huron at the age of 12 to move to Minneapolis and later attend the University of North Dakota, she couldn't wait to return to the Blue Water area for school and summer breaks. Enjoying visits with family members and time on the lake kept St. Clair County on her radar when she graduated from college.

"Everyone was going back to the twin cities after graduation but I wanted to go to a smaller town so I returned to Port Huron in 2016," Michaluk says. "And now there's been a resurgence in the area making a small town a bigger town and it's really an exciting time."

Hearing that St. Clair County continues to push economic development and investments that are bringing people back to the city is not surprising to those who gather statistics about such things.

The U.S. Census Bureau recently released data reflecting the fact that the county has the highest net migration of college-educated people in the state - 1.6 percent.

"This is great news," Port Huron City Manager James Freed says. "This report is an affirmation that what we see happening in our city isn't just a feeling, but is real and measurable. Our collaborative partnerships with the private sector, government, education, and philanthropy are paying off. These efforts combined with our pro-growth policies have expanded opportunity here."

Economic Development Alliance of St. Clair County (EDA) CEO Dan Casey says while he was surprised the county was listed as No. 1 in the state in the U.S. Census data, he also sees that more and more graduates are coming back to the area.

"I really think it's a generational change, more people are retiring, which brings more employment opportunities here that weren't here in the past," Casey says.

Misconceptions about the wage scale and availability of professional employment were also barriers the county needed to overcome and they have done that over the last few years.

"We have established a balance in wages between metro-Detroit and our county and implemented talent initiatives, including a jobs board," Casey says.

Matthew Gregor, the co-owner of AXA Advisors in downtown Port Huron, moved to the city to in 2015 and can attest to how a transplant to the area has welcomed boundless success.

Growing up 40 miles south of Port Huron in Sterling Heights, Gregor, now 30, says he lived all over the country before returning to work for a financial entity in Troy. When the opportunity to open his financial advisor firm in the city came about, he made the move despite not really being familiar with the area.

"I really like the small town feel here but also feel like I have a stake in the community, to see the growth but also be a part of it," Gregor says. "And the summers are beautiful here with the lake just a couple blocks from my house and I can ride my bike downtown and see and talk to people I know."

Happy to report his growing business will move to larger offices soon, Gregor says he also met his wife in the city several years ago, she's from Canada which is no big deal for the families to navigate with the Blue Water Bridge practically on his doorstep.

"I got married a couple of years ago and we just had a baby boy so this definitely feels like home now, we aren't going anywhere," Gregor smiled.

Michaluk, 24, is the News Director at Everything Blue Water TV and says she certainly agrees that moving to Port Huron has been a success. She's been able to learn about the area while reporting on it and the best part is "it's all good news," she says.

As president of the Blue Water Young Professionals, Michaluk enjoys sharing all there is to love about her hometown with new job seekers.

Seeing the community working together to bring growth and change is particularly gratifying as it means people are working towards a common goal and really want to make things better.

"There are new hotels and retail now and there really hasn't been a nightlife here for the young professional but now there will be and that's so exciting," Michaluk says.

Published in The Keel: Read More