Community address touched on many topics 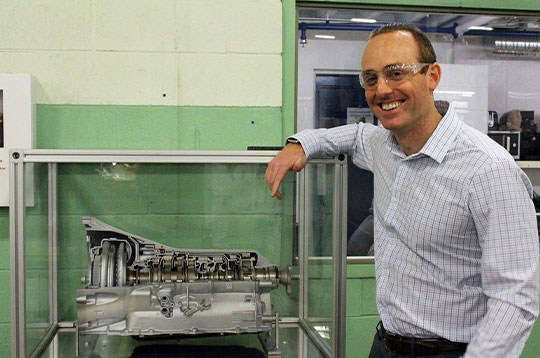 A company with nearly 40 years of history in Port Huron is investing in the community's future.

The story of P.J. Wallbank Springs Inc., a manufacturer of spring assemblies for automotive and truck clutches, begins in England in 1954 Phil Wallbank, a springmaker by trade, saw a newspaper ad for a foreman's position at a spring factory in Ontario. Eager for an adventure, Wallbank responded to the ad, got the job, sold nearly everything he had and moved his wife and young children to Canada.

Alas, the factory turned out to be a few machines in a small garage. Wallbank figured if he was going to work in humble surroundings, he might as well work on his own.

In 1955, he launched his own company, P.J. Manufacturing. Armed with a few orders and a bank loan of $300, he went to work in the basement of an old farmhouse he had rented for his family. He fashioned his own machines for making springs out of old washing machine motors and hardware scraps and tempered the springs he made in the kitchen oven.

In 1982, to get better access to the U.S. market, Wallbank's son, Mel, moved the company to Port Huron and christened it P.J. Wallbank Springs Inc. Then and now, the company focused exclusively on what are called spring packs, collections of springs in a single assembly that are housed in transmission clutches.

The company also designs and makes all of its own machines to tool the springs.

Chris Wallbank, the company's president and Mel's son, said the company makes more than 80 varieties of clutch spring products. He said more than half of its sales are to customers outside of the U.S. He is a tier one and tier two supplier to companies in South America, Canada, Mexico and Europe, with more than half of those exports to China. The company has sales offices in Germany and China.

To help train future workers and as a way to contribute to the community, Wallbank Springs has committed $25,000 a year for the next six years to help fund the cost of educational materials and engineering equipment for the new STEAM (science, technology, engineering, the arts and mathematics) programs and labs the Port Huron public schools are creating.

According to Jamie Cain, the schools' superintendent, STEAM labs will be built at six of the district's 16 schools. Construction is part of phase two of a three-phase $106 million bond proposal passed in 2016.

On Jan. 23, a ribbon cutting was held at the first STEAM lab to come online, at Port Huron Northern High School, the school where Wallbank graduated in 2002. The lab is named the P.J. Wallbank Springs Inc. Engineering STEAM Lab and involves 20,000 square feet of new construction, at a cost of $1.2 million.

A lab of the same size and cost is under construction at Port Huron High School. Labs at three middle schools will incorporate existing space, as will the one elementary STEAM lab.

"The average age of a school building in Port Huron is 68. We needed to create modern learning spaces, and we talked to local business leaders about how to do that," said Cain. "We wanted community partnerships, and the one with Wallbank Springs is a showcase partnership.

"We met with Chris and the problem he was having, like a lot of others here, was how do you find good employees? He's growing his business and finding employees is hard."

Students will get mentoring and some instruction from Wallbank Springs employees, will make field trips to see plant operations and will have access to internships, job shadowing and part-time and summer jobs.

"This is a way for Wallbank Springs to get to know students before they leave high school," said Cain.

Wallbank said his company already employs two Port Huron students part time and will collaborate on the STEAM curriculum and staff will regularly visit the schools and provide input and advice. "We want to show kids there are opportunities within this organization. There are good careers here. Dynamic careers.

"I fundamentally believe in this area. People complain about the lack of people in the work force, the lack of capable people. These are smart kids who were lacking in opportunities. Our success as a company is predicated on the people we have here. The superintendent gets it. We're very lucky to have him," said Wallbank.

Wallbank said he employs about 150 now and expects the company will need another 50 or so over the next two years to manage projected growth.

In 2016, the company bought a 50,000-square-foot building across the street from its headquarters and plant. It uses some of it as a warehouse and is expanding manufacturing operations into the space.

But it has also set aside 5,000 square feet of space in the building for the county's 14 high school robotic teams, who formed the Bluewater Area Robotics Alliance in 2014, to call home.

Wallbank said he read in the Port Huron Times-Herald that the alliance wanted a place it could count on, instead of teams at different schools struggling for places to regularly meet and work on projects. "Local teams might be able to get part of the high school gym from 8 p.m. to 10 p.m. on a Tuesday night to meet and create. They'd have to be off to the side, weren't allowed on the gym floor, that kind of thing," said Wallbank.

Walls were put up that partition the Alliance from other building activities, with a grand opening in a month or so at a date not yet set.

"The end customer is the community at large," said Wallbank.