Does Port Huron have one of the most economically vital downtowns?

Cain: Zooming into kindergarten round up 2020 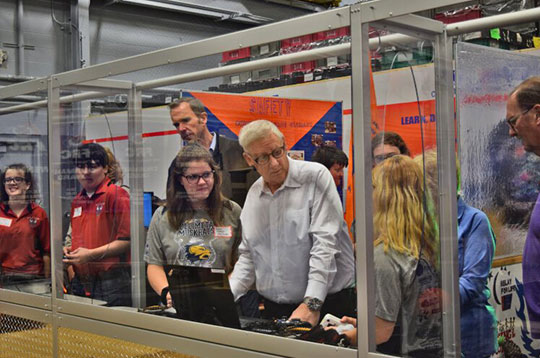 School-level robotics is growing rapidly countrywide, statewide, and especially throughout the Thumb. Thanks to team dedication and support from the community, many of our local teams are now enjoying their own practice field, the Blue Water Area Robotics Center.

It all began when Chad Miller and Dan Kiehler, who were mentors for the Memphis Community Schools’ Jacked Up Jackets, watched the state finals in 2018. A practice field, they thought, would make a huge difference in the teams’ progress, so they put a plea out on Facebook for some space, which was picked up by the local media.

This led to a donated space from P.J. Wallbanks Springs in its warehouse at 2005 Petit St. in Port Huron.

"The support of private industry speaks volumes to the value of this program. When business leaders step up the way the Wallbank family did you know you’re on to something," says Hale Walker, Grants Committee Chair of the Community Foundation.

"It makes a huge difference to have a place where everyone can support each other and where everyone can practice. I’m so proud of that (Blue Water) area, and I can’t wait to see the good things that come out of it,” says Gail Alpert, president of FIRST in Michigan.

The field is home to the Blue Water Area Robotics Alliance http://bwara.org/#teams, a group of nine teams and counting. Each has an eight-foot by eight-foot work area where they can put their pit. Some have put up artwork, and banners adorn the walls. The teams have 24/7 access. For comparison, the Memphis team was working in the school’s old woodshop, and most other schools used regular classrooms that had to be put back in order after practice.

“It’s way beyond what we ever thought, or what I ever thought, it would be. It’s what I dreamed it would be,” Kiehler says. Making the dream a reality has been a true community effort as the teams worked hard to make each space their own.

To set it up for use, Kiehler and Steve Tenniswood, lead coach/mentor for East China’s The Flurb, became the contact people for the facility and helped with its organization. Before using the warehouse, BWARA had to become an official nonprofit organization, setting up bylaws and establishing a board, which attorney Gary Fletcher helped with pro bono. The teams had to figure out insurance through the schools, talking with each district to sort it out.

"The Community Foundation’s support of the Blue Water Area Robotics Center ended up being one of the easier decisions for the Grants Committee," says Walker. “Not only has this (emphasis on technology/engineering) been in the wheelhouse of our priorities but the enthusiasm and success of this program throughout St Clair County hasn't been missed on any of the committee members.”

Teams began moving into the BWARC in February, and a huge grand opening event, recognized by both Congressional and Senatorial certificates, took place on Oct. 8.

Robotics is a sport that is known for its friendly competition and teams that aren’t afraid to help and support one another. There are no secrets between the teams using the new practice field. They work together, especially because the Blue Water Region's teams are much smaller compared to its neighbors.

"Everybody's robots will end up being different because everyone has their own way of doing things. If somebody comes up with a great idea, this whole thing was set up so that we can compete against some of the big teams in the city," Kiehler says.

"We’re hoping that having the facilities and collaborating together will put us more on par with these teams."

According to Alpert, last year Michigan had more high school FIRST teams --539-- than any other state in the country by a few hundred. Some Michigan teams have upward of 80 students, help from dozens of engineers, laser-cut robots, and plenty of resources. Even the largest teams in the Blue Water Area have half the students, and Memphis, for example, has less than 10. But more teams are popping up each year. Recruitment is at an all-time high. And with our hometown teams' skill and enthusiasm, almost half of the BWARA teams make it to States each year. The possibilities are heightened even more with the new warehouse.

"We would like it to become something like a training and education center, not just a practice facility," he explains. Kiehler says there are plenty of potential uses for future donations: cameras on the field, workstations for CAD, 3D printers, better Internet, tools and machinery, routing electrical on the field, and more.

Robotics goes hand-in-hand with the increase of technical trades and automation. It’s growth benefits students as future employees and businesses who will need employees.

“We want students to be exposed early, decide if they like the robotics and technical fields, and then give them some tools and opportunities so they can learn their craft,” says Casey.

Being part of a robotics team gives students a well-rounded skillset, shown on social media with #morethanrobots. Even if they decide not to pursue engineering or a related field, team members often take on media and marketing positions, learn business tactics and, in the case of the Blue Water Region, get experience starting a facility from scratch.