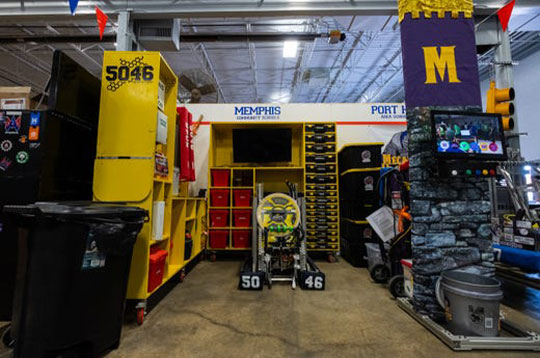 The arms of a dark blue robot unfurled and lifted up a disk with Velcro edges Tuesday afternoon. Carefully, it maneuvered to a tall tower with circular holes cut into it. The driver carefully manipulated the machine to place the disk over one of the holes, sticking it onto the tower.

Ahead of Mitchell's arrival, students from nine area robotics teams manned their work stations inside the space. The space itself is provided by P.J. Wallbank Springs at 2005 Petit St., Port Huron. Teams began moving in back in February, but the facilities have come a long way since then.

Cardinal Mooney Catholic High School juniors Alex Kerry and Avery Forra, both 16, said they had been using the facility for about seven months, and were excited to enter the coming season.

"It really gives us a chance to test our designs and communicate with other teams," Alex said.

Both said they were introduced to engineering through robotics, and intend to pursue it as a career.

"I had never even thought about it before," Avery said. "Just a great hands on experience."

Where tape was used to mark the field on the floor, now stands a fully equipped practice field in accordance with FIRST robotics regulations. The field cost about $23,000 to build. The largest donor to the project was the AT&T foundation, St. Clair County Economic Development Alliance CEO Dan Casey said. The Community Foundation of St. Clair County and the Economic Development Alliance also chipped in.

Casey said FIRST Robotics provides valuable skills to young people, and facilities like this one offer valuable hands on experience. There are still a few items to add to the practice space, Casey said. Computer systems with computer-aided design software, better known as CAD, drill presses and file cabinets are also on the list.

Casey said he would like to see similar hands-on educational opportunities offered in fields beyond engineering, naming nursing as an example.

"We know it's the right thing to do, we want to do more of it in other industries," he said.

Mitchell toured the facility and spoke with students, mentors and others in attendance for about 45 minutes before offering a few remarks to the crowd.

He thanked Chris Walbank and P.J. Wallbank Springs for providing the space.

"This is cool and fun stuff, and I think it's wonderful for our young people," Mitchell said.

Support stories like these. Find our subscription offers here.